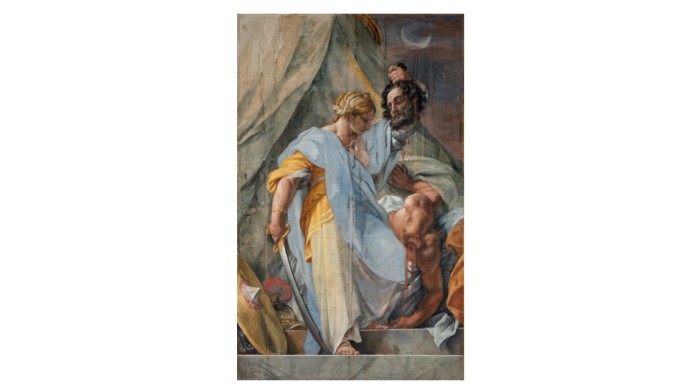 0%
Pledged in 2018 Donor:  Amy Mazzolin Dimensions: 500 x 315 cm Materials: Tempera on canvas Inventory Number: 41644 The cartoon in this painting refers to the story of the courageous, God-fearing widow Judith of the ... Read more

The cartoon in this painting refers to the story of the courageous, God-fearing widow Judith of the Old Testament, who rebelled against the oppressive Holofernes in order to defend the Jewish city of Betulia. During the siege of the city by the Asyrian army led be General Holofernees, the beautiful and wealthy Judith of Manassehi, invoking divine protection, approached the Assyrian general with her servant, bringing gifts and dissembling herself with a desire to betray her own people. After Judith received the trust of Holofernes and induced him into a drunken stupor, she beheaded him: Then she went to the bedpost near Holofernes’ head and took down his sword. When she came closer to the bed, she grabbed the hair on his head and said, “Give me strength today, Lord God of Israel.” She struck him in the neck twice with all her might and cut off his head” (Judith 13, 6-8).

Judith, a true biblical heroine, is one of the most represented female figures in Western art. Visual representations of Judith were especially prolific in the 17th century, during which she was often represented as Justice, armed with a sword, and an emblem of the power of the Lord in the victory of the weak against the strong, analogous to the biblical episode of David and Goliath. The painter stages the moment after the beheading, when the woman comes out of the tent with the scimitar at her side and raises the head of Holofernes to the sky. She stands erect and proud in a dress reminiscent of ancient statuary. At her side slouches the disarticulated body of the general. The night scene shows an exceptional luminism in the contrast between the tones of Judith’s dress and the sky.

State of Preservation:
These works are in precarious condition. The surfaces are dirty and show areas of oxidation of the substrate. Several tears are present and some swelling and deformation is apparent.