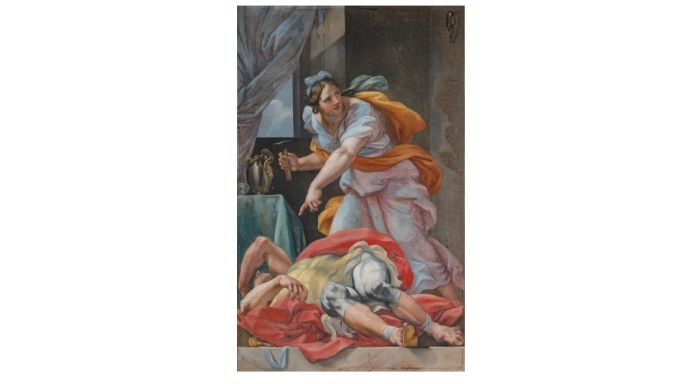 Jael, whose story is told in the book of the Judges, is one of the most important female figures of the Old Testament together with Judith. Symbolizing the victory of humility over pride, Jael, wife of Eber, welcomed into her home the young Sisera, a commander fleeing the Canaanite army, beaten in Cazor by the Israelite warriors led by Barac. After having offered the guest a drink and a bed, in the night the woman, faithful to her king, killed Sisera by planting a tent peg in his head with a hammer, contravening the rules of reception and the Mosaic law that forbade the use of a weapon against the host.

The most important visual representations of Jael belonging to the Baroque period were done by Artemisia Gentileschi from 1620 (today located in Budapest) and Andrea Pozzo in the vault of the church of Saint’Ignazio in Rome 1685.

Maratta’s cartoon represents the moment in which Jael, still with hammer in hand, indicates the fallen enemy to the commander Barac. The patriotic impetus of her character is accomplished with this gesture. The prophetess Deborah praises the work of Jael in the canticle that follows the biblical episode: Most blessed of women be Jael … so may all your enemies perish, Lord (Judges 5, 24, 31). Differing from Maratta’s cartoon of Judith, in which the figures are extremely vibrant and invigorated by their swirling garments; the body of Sisera, positioned sideways, suggests the profundity of the scene and invades the realm of the spectator with his protruding foot.

State of Preservation:
These works are in precarious condition. The surfaces are dirty and show areas of oxidation of the substrate. Several tears are present and some swelling and deformation is apparent.